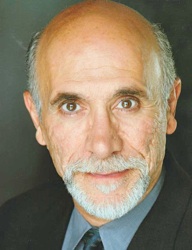 It’s difficult to imagine that Tony’s simple dream 28 years ago to “work as an actor” would take him to Mexico, Japan, New Zealand, Australia, England, Bulgaria, Canada, across the United States and even to the stage of the new Disney Concert Hall.

Born in New Haven Connecticut into a blue-collar family, Tony was the first member of his family to attend college.  He grew up on the East Coast before his work took him throughout the world.

He spent the first 12 years almost exclusively in the theatre appearing Off-Broadway in an acclaimed production of “Filumena” and in leading roles on the stages of America’s top regional theatres, including the Mark Taper Forum,

His film work as been varied and rewarding, including appearances opposite Johnny Depp in Ted Demme’s Blow, Anthony Hopkins and Antonio Banderas in Martin Campbell’s The Mask of Zorro, Chris Cooper in John Sayles’s Lone Star.  His TV guest star roles include “West Wing”, multiple episodes on “The Practice”, “Judging Amy”, “Robbery Homicide Division”, “X-Files”, and a long running role on “Stargate SG-1” as Master Bra-Tac (a Jaffa Obi-Wan).

The past 18 months have been productive and Tony has four films awaiting release, including Dragon Slayer opposite John Rhys Davis, Club Dread with Bill Paxton, Shade with Gabriel Byrne and Sylvester Stallone, and a wonderful part as a blind sorcerer in

Tony has a passion for studying languages, currently struggling to attain fluency in Italian and Spanish.  He avidly practices yoga, loves to cook and lives in Silver Lake with his wife Judith.

And, oh yes-he was thrilled to appear at the new Disney Hall in their premiere